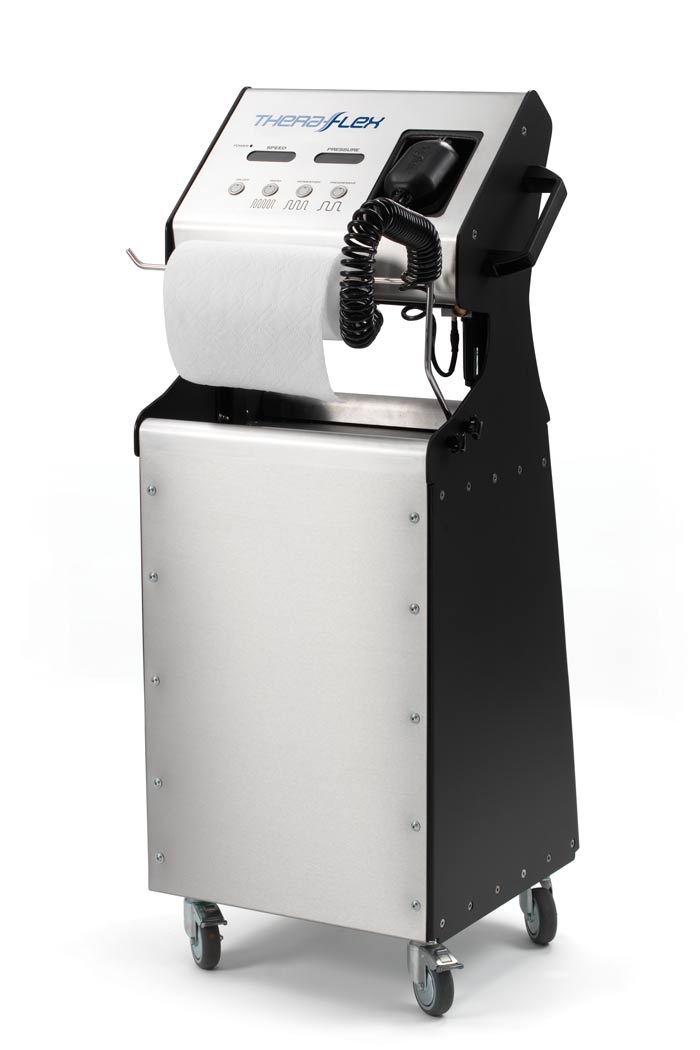 If you’re looking at this, you’ve probably seen something on Facebook or heard from a person who has benefited by Reflex Therapy, also known as Theraflex treatment.  Even though it was originally designed to relieve pain and immobility of the spine from injuries due to sports, accidents or work (mechanical injuries), we found that it could have an amazing effect in scoliosis treatment as well.

The first case that came to our attention was a lady in England whose curvature had reached about 55 degrees.  G.S. was 49 at the time and surgery was advised and money allocated for it.  Her prognosis was as follows: months in a cast, 1 year in physiotherapy and after that, they didn’t know….

This was honest but not an inviting prospect.  It happened that she lived in the same town where the first therapist to practice what we now call Reflex Therapy was making waves in the community with the ‘back machine’ that was working wonders with so many back sufferers.  Athletes, office workers with achey necks, lower-limb amputees, equestrians, farmers, laborers, housewives and people who had suffered from chronic back pain for years were spreading the word that there was finally something that could sort out their problems and stop the pain and discomfort.

G.S. decided to investigate whether or not she too could get help and after careful evaluation, began a course ot treatment that resulted in a 20 degree correction that she has been able to maintain with exercise and occasional ‘top-up’, or ‘mainenance’ sessions.  Following this, her doctors deemed the surgery no longer necessary and she has been able to live a normal life for more than a decade.  All this was accomplished without surgery, without forceful manipulation and without pain, nor was she incapacitated during the course of treatment.  It was uncomfortable at times but alternatives would have been much more so.

Since then, we’ve treated many more clients with scoliosis, young and old and all in between.  We have been able to obtain greater correction that we ever thought possible in the beginning. The treatment protocol is basically the same as for mechanical problems, though we are finding that spending more time per session gains a better result without stressing the client.  Most find this therapy more comfortable and easier for them than some of the other therapies they have tried.  It can also be used in conjunction with the various exercise therapies that are also effective in correcting scoliosis and in fact, can enhance them as well.

Simply put, Reflex Therapy relieves the obstructions that prevent the spine from correcting.  It is possible to see the correction with the naked eye and in a few sessions there can be a measurable, visible difference.  The most important thing is that the client can feel and see the improvement.

Oddly, when we treat those with non-scoliotic mechanical back problems, they experience more muscle soreness in the ensuing few days following the initial sessions than scoliotics who are experiencing more startling changes.  This has enabled us to to treat clients who have to travel long distances to obtain treatment and are not available on a weekly basis.

Reflex Therapy is safe, gentle and effective and it is also affordable.

Please feel free to contact us to learn more and check out the Facebook video posted by Damien Mearns who has generously, and entirely at his own expense, recorded his experiences to inform others with scoliosis.  His Facebook page is:

?If you’ve been taken aback at the high cost of many therapies for scoliosis, you’ll want to take another look at Reflex Therapy and the Theraflex.  Our hearts go out to the thousands of conscientious parents and families who truly have to make great sacrifices to find help for loved ones whose lives are deeply affected by scoliosis.  We’re happy to say that more progress can be made more quickly with Reflex Therapy and at less expense than we’ve seen with any other non-surgical treatment.